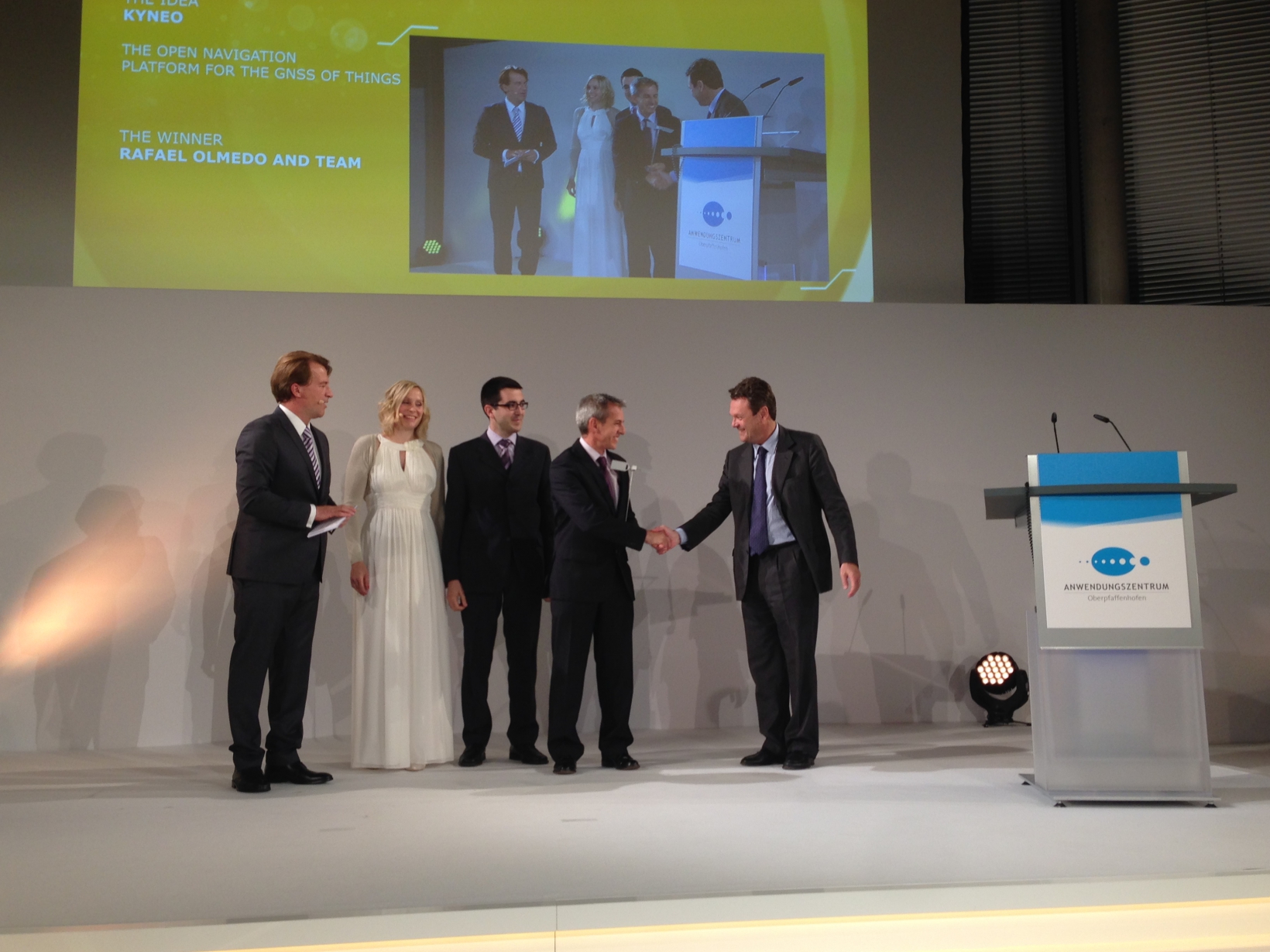 The 2015 edition of the European Satellite Navigation Competition (ESNC) once again saw increased entries, and this year’s European GNSS Agency (GSA) Special Prize went to the KYNEO project, set to take on the Internet of Things.

From a crowded field of entries, this year’s GSA Special Prize went to a familiar face – Rafael Olmedo and his KYNEO project. This is the second time the Spanish tech entrepreneur has won the GSA Special Prize, he first won it in 2012 with his 3D SOUND NAVIGATION solution.

For 2015 edition, Rafael’s innovative concept involves the development of cheap, flexible Galileo and EGNOS enabled modules that allow ubiquitous positioning data for applications in the Internet of Things – a potentially massive global market.

The basis of the KYNEO concept is a perceived need to be able to fast prototype applications and devices in the rapidly developing field of the Internet of Things. According Rafael, KYNEO is best described as an “open innovation platform for the GNSS of Things.”

Having been involved with many previous GNSS research and innovation projects, Rafael was able to bring unique insight and experience to the table. In terms of the Internet of Things, what he saw was that many different products and services are looking for similar solutions for positioning that can be flexibly adapted in different contexts – something particularly true for developers.

Seeing an opportunity, he set to work. The result is KYNEO, an Arduino-compatible board that allows developers to rapidly and flexibly build their own solutions based on open–source software. Arduino is an open-source electronic prototyping platform for the creation of interactive electronic objects.

“There is a huge development community for digital electronic products out there and our aim with KYNEO is to provide a great positioning tool for this community,” says Rafael. “The first KYNEO products are already available to order via our website, but we will also sell via the many open hardware platforms that already serve the developer community.”

Although the KYNEO product is competitive in its own right, Rafael sees associated services as being the main money-spinner for his company. “There will be some profit in selling the products themselves, but these sales will open doors to services and consultancy,” he explains.

“The product will give visibility to KYNEO and the technology support and consultancy services we provide.”

Rafael highlights the flexibility of the KYNEO concept as being a key factor. “The KYNEO concept can easily provide a portfolio of functionalities in terms of positioning technologies, connection with other sensors, memory options, networking and communications,” he says.

“Application developers can use it as a ‘black box’ or get more involved to customise the unit.”

“The GSA Special Prize nicely complements the Agency’s focus – getting closer to the end user and helping them benefit from European space technology,” said GSA Executive Director Carlo des Dorides. “Whether through competitions like this, or through such funding programmes as Horizon 2020 and Fundamental Elements, it’s by supporting innovative applications like KYNEO that the GSA will be able to succeed at its mission.”

The 2015 edition of the ESNC received a record number of entries. Rafael’s winning idea was competing against a total of 192 entries from 29 different countries, with 72 entries coming from individuals and 59 from start-up companies. In terms of topics, the majority of entries were submitted under the location based services (LBS) category, followed by Smart Mobility and Safety and Security.

This annual event recognises the most outstanding applications for Copernicus and European GNSS (Galileo and EGNOS) in various categories. Since 2014, the awards ceremony has been associated with the Satellite Masters Conference, taking place this year from 20-22 October.

The conference features plenary sessions, workshops, and roundtable discussions centred on leveraging satellite-derived data and other space solutions for business and society. It is a unique marketplace for sharing ideas on space-based innovation and connecting with the world's leading network for downstream satellite business.