EGNOS: The Smart Choice for Aviation 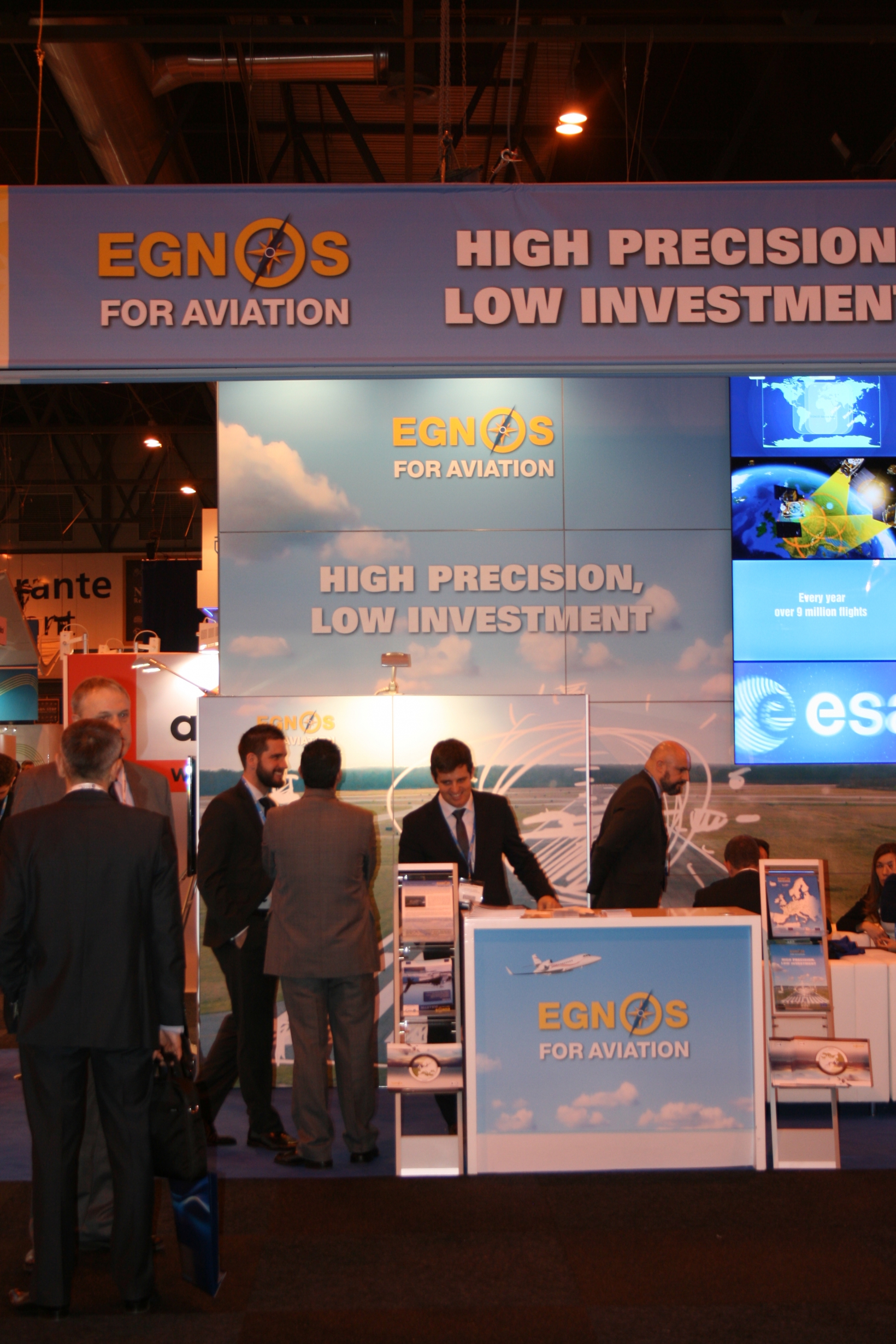 The World ATM Congress is the ideal venue for EGNOS to engage with partners and to introduce airports and ANSPs to the benefits of Performance Based Navigation (PBN). An EGNOS dedicated workshop organised by the European GNSS Agency (GSA) and ESSP on 10 March brought together ANSPs and airports interested in operational implementation.

According to GSA officials, the aviation sector remains a key market segment for EGNOS. “EGNOS was designed for aviation, and with over a quarter of all airports in our target market being EGNOS-enabled, we’re seeing great results and are well ahead of where we want to be,” said GSA Head of Market Development Gian Gherardo Calini. “From our work across all airspace user segments, European airports and OEMS, it is clear that EGNOS provides very clear benefits to all.”

Many Benefits for Airports and Operators

At the top of this list of benefits is RNP down to LPV approaches, which enable all weather near-precision approaches without the need for expensive ground equipment. Today, EGNOS allows 250 feet minima, with the objective being to reach 200 feet minima by the end of the year, which will significantly increase the operator’s real operational capability and safety.

“Today, 176 LPV procedures are already in use in more than 113 airports across Europe, providing a cost effective alternative equivalent to conventional ILS CAT I instrument landing procedures,” says Thierry Racaud, CEO at the European Satellite Service Provider (ESSP), who is operating the EGNOS system under a contract with the GSA. “LPV200 will be a major milestone for the EGNOS programme and will further encourage the implementation of EGNOS procedures at airports across the full EU-28.”

Another advantage of EGNOS is its interoperability with other SBAS systems – without the need for different avionic equipment. As a result, most manufacturers in the general and business aviation sectors are already putting EGNOS-ready equipment on-board new models. At the same time, the commercial manufacturers are taking notice, with many OEMS installing EGNOS equipment into their latest models.

EGNOS is also free of charge. For no additional costs, the EGNOS satellite signal allows aircraft to more accurately determine position, reduce errors in GPS data, and allows for almost precision landing approaches. Airports also benefit as EGNOS reduces the need for costly maintenance of ground infrastructure. More so, it can reduce the occurrence of delays, diversions and cancellations at airports where a Non Precision Approach procedure is the only option so far.

All of these benefits will be further enhanced with the next version of EGNOS, which will allow LPV200, as well as a substantial extension in coverage area.

To put this in the frame of figures, an independent cost-benefit analysis commissioned by the GSA indicated that the benefits for Europe’s aviation sector will be total €2.4 billion by 2030. Of this total savings, about €1.2 billion is due to reduced flight delays, diversions and cancellations. Another €900 million in savings is the result of the reduction of Controlled Flight into Terrain (CFIT) accidents, and €300 million due to the phase out of infrastructure navaids.

The Benefits of EGNOS

Today’s GNSS penetration in the global aviation market is over 80%, and GNSS is expected to reach over 90% penetration by 2022 as an enabler of PBN. The shipments of EGNOS enabled devices are expected to dominate the entire market, including the commercial/regional, business and general aviation segments. The penetration of SBAS enabled units in equipped aircraft is expected to increase from some 20% in 2012 to 60% in 2020.

To support this growing market, continued adoption throughout the segment must be ensured. To accomplish this, steps must be taken to facilitate EGNOS adoption through enablers/tools/methodologies to facilitate LPV implementation. This includes increasing the availability of cost efficient avionics solutions, supporting operators in getting both equipped and certified with EGNOS avionics and facilitating crew training for such operations.

In support of all these points, the GSA is overseeing several funding opportunities. The Horizon 2020 Framework Programme for Research and Innovation’s current call has €25 million available in funding. According to GSA Market Development Officer Carmen Aguilera Rios, the GSA is particularly interested in aviation applications dealing with GNSS. “During the first call, five of the funded projects dealt with aviation,” she said. “As this is an important sector for EGNOS, similar numbers are expected from the second call.”

More so, in 2014 the GSA launched a call for proposals to foster further EGNOS adoption in the European civil aviation sector. According to Aguilera-Rios, the objective of the call was twofold. “On the one hand, the grant aims to support projects that enable users to equip and use their aircraft or rotorcraft fleet with GPS/SBAS-enabled avionics,” she said. “On the other hand, it aims to allow Air Navigation Service Providers and aerodromes/heliports to implement EGNOS-based operations in Europe.”

A similar call for proposals for 2015 is currently in development and is expected to launch in May.

EGNOS for All Aviation Sectors

The workshop also highlighted how EGNOS benefits all aviation sectors, including commercial/regional, business, general and rotorcraft. On the commercial aviation side, the focus in primarily on the regional sector, with the GSA regularly offering support to regional airlines and airports to implement EGNOS-based operations.

Likewise, both business and general aviation are key market segments for EGNOS. Business aviation operators require getting to a meeting as quickly and efficiently as possible, often requiring landing at smaller airports where ILS or other expensive navigation aids are simply not feasible. Implementation of EGNOS-based procedures at these airports significantly improves accessibility. Today, most business aviation manufacturers already forward fit EGNOS capability into their aircraft. To support this, last summer the GSA and the European Business Aviation Association (EBAA) signed a Memorandum of Understanding to promote wider use of EGNOS at regional airports in Europe.

In the General Aviation sector, a GSA survey confirmed the vast majority of the European GA IFR community (85%) is either interested in installing and using SBAS or, at the very least, have considered using it. Approximately 48% of participants indicated that their aircraft are already SBAS capable, although this does not necessarily mean they are allowed to perform LPV approach procedures. The GSA is supporting the development of cost efficient avionics solutions, such as an AML STC for GNS 430W/530W equipment – the most commonly used avionics in EU GA fleet – to significantly reduce the certification costs to enable LPV operations.

Another important sector is rotorcraft, where EGNOS provides helicopter operators a clear advantage by enhancing vertical precision and integrity to improve safety, accessibility and efficiency for operators, pilots and helipads across Europe.

EGNOS leads to a substantial reduction in the decision height, making helipads accessible in poor weather conditions and thus enhancing safety – of particular importance to medical and emergency operations.

In summary, for both operators and airports, EGNOS is a smart choice: with little need for on-board equipment and no need for a ground infrastructure, EGNOS offers all users increased accessibility and safety.

To celebrate this EGNOS advantage, the workshop concluded with an awards and recognition ceremony for some of the ANSPs and operators who have recently signed EWAs and/or published their first LPV procedures.

Working Agreement Signature Awards were given to the following ANSPs: