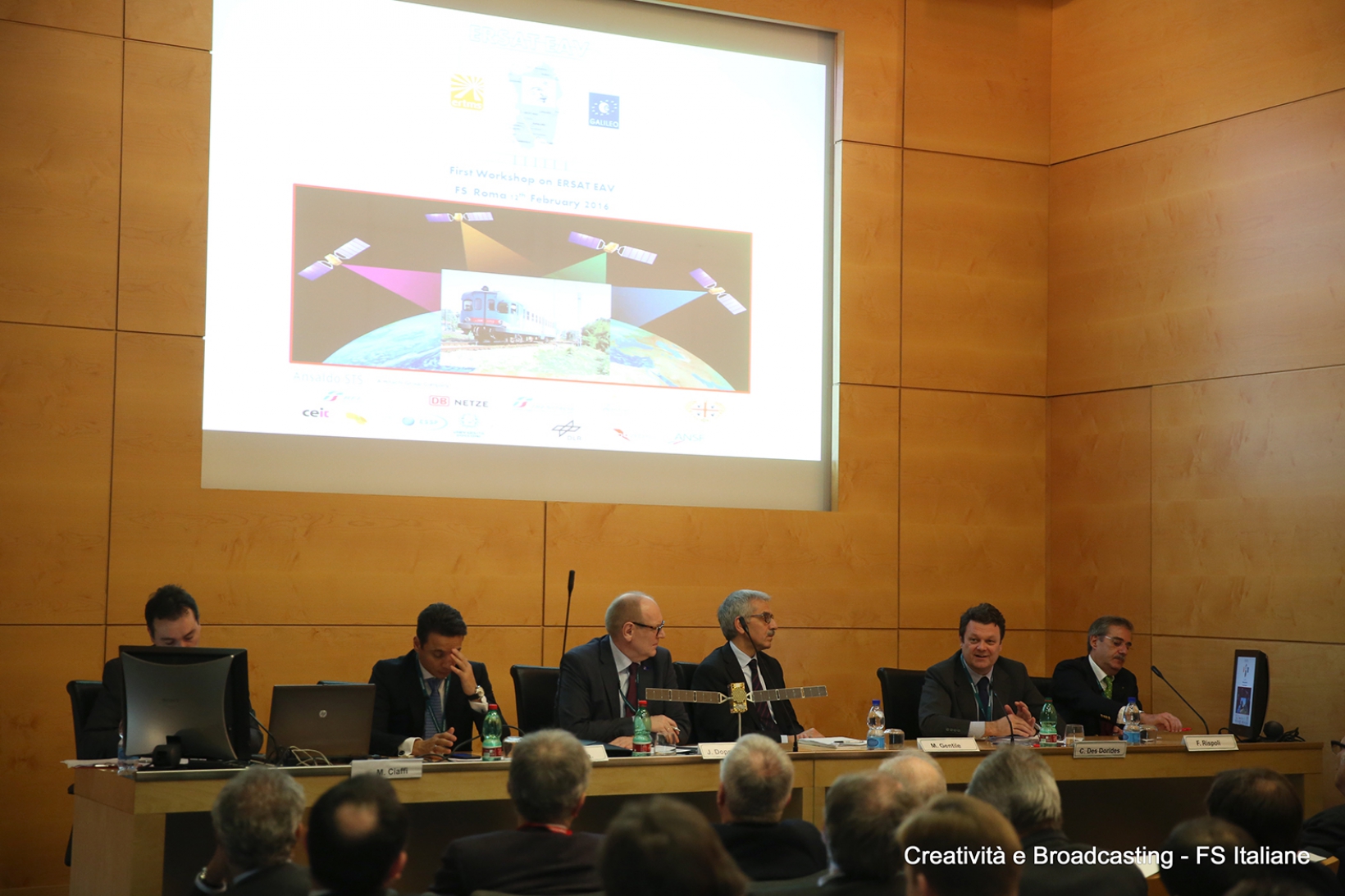 The GSA believes rail transport has the potential to become one of the largest downstream markets for EGNSS in terms of volume, public utility and contribution to safety.

The European GNSS Agency (GSA) says European rail is standing at the edge of a technological breakthrough, where GNSS will work in tandem with current technologies for a safer and more reliable European railway system.

Since the GSA began intensifying its work within the rail segment, interest in the role of GNSS within this important segment continues to grow – a fact made clear by the many stakeholders in attendance at a recent workshop hosted by the ERTMS on Satellite – Enabling Application Validation (ERSAT EAV) project. Attendees included representatives from the European Railway Agency, FS Italia, RFI, ANSF, Deutsche Bahn and Ansaldo, among others. Together with interested receiver manufacturers and a variety of system integrators, the representatives of the entire Rail/GNSS value chain were present at the meeting.

“Your attendance clearly confirms that, step-by-step, we are empowering railways with the possibility to benefit from European GNSS (EGNSS),” says GSA Executive Director Carlo des Dorides during his opening remarks at the workshop. “Thanks to such projects as ERSAT, I am convinced that European rail is standing at the edge of a technological breakthrough where GNSS will work in tandem with current technologies, resulting in a safer and more reliable railway signalling and positioning system.”

The GSA firmly believes that rail transport – and in particular local and regional lines – has the potential to become one of the largest downstream markets for EGNSS in terms of volume, public utility and contribution to safety. According to the most recent edition of the GSA’s GNSS Market Report, among GNSS components and receivers for the rail segment, European companies have a market share of 38%. On the other hand, among system integrators, European companies enjoy a dominant 72% of the market, and also have significant exports to North America and Asia. The report further states that by 2020 the installed base of GNSS receivers in the segment is expected to surpass 150,000 units.

“Outside of Europe, the demand for GNSS-based rail signalling systems is growing, and we are convinced that ERTMS, as a state-of-the-art signalling technology, would be better positioned within the global market if it was GNSS enabled in the future,” says des Dorides. “More so, outside of signalling, there are additional applications for GNSS, including, for example, Driver Advisory Systems, which can help rail become more energy and logistically efficient.”

“The potential of GNSS as an innovative solution capable of decreasing costs for ERTMS deployment and operation has been discussed for some time,” explains des Dorides. “Today, the key instruments for turning these discussions into reality are in place, including such Horizon 2020 projects as ERSAT, and aim to provide a final demonstration of the applicability of GNSS to low density lines.”

In parallel to the ERTMS work, the GSA has also supported the Shift2Rail initiative – the first European Joint Undertaking for railways – since its early beginnings.  The initiative is set to launch projects geared towards accelerating the integration of such technologies as GNSS into rail solutions next year.

The belief in the essential role of EGNSS within European rail is one widely shared by many of the workshop’s speakers and attendees. For example, European Railway Agency Executive Director Josef Doppelbauer confirmed that the long-term evolution of ERTMS will involve EGNSS technology not only in signalling, but in driver advisory systems and logistics-related applications too. Rete Ferroviaria Italiana (RFI) Head of Train Control and Command System and Telecommunication Fabio Senesi, speaking as an infrastructure manager, stressed the need to reduce investment and operating expenses while maintaining safety – and that GNSS is well-positioned to deliver both. In addition, Trenitalia Technical Director Marco Caposciutti, who has been involved in the preliminary integration of ERSAT GNSS-based train positioning on a Sardinian railway line, reports that initial results are positive.

In other words, from the GSA to rail infrastructure managers and operators the consensus is clear: GNSS – and in particular Galileo and EGNOS – is the technology of the future, set to deliver safe signalling at a lower costs for Europe’s rail network. “We are confident that both in the GSA-supported Horizon 2020 projects and in Shift2Rail, the rail industry will manage to overcome the last technological barriers for GNSS adoption, paving the way for more cost efficient train control solutions that will ultimately bring benefits to European citizens,” concludes des Dorides.

The Horizon 2020 funded ERSAT EAV project aims to verify the suitability of such EGNSS services as EGNOS and Galileo for the rail sector – and in particular within regional lines. The project is defining and developing the safe localisation of train positioning based on satellite technology and ensuring such a system is in harmony with the European ERTM standard. In the current phase, it is measuring and evaluating gaps between technology and railway requirements, performing measurements in real operating conditions, building models, using simulation for analysis purposes and validating the solution using a pilot line as a reference for the future standardisation and certification process.

The ERSAT EAV project is a key part of the strategy to prioritise the uptake of EGNSS within the rail sector and fostering innovation within the European space and rail industry. The project plays a critical role in demonstrating the enormous opportunity that EGNSS offers to the ERTMS, especially as it applies to local and regional lines, which currently represent nearly 50% of Europe’s total railway length.