He shoots, he scores! JOHAN wins EGNOS prize at ESNC 2013 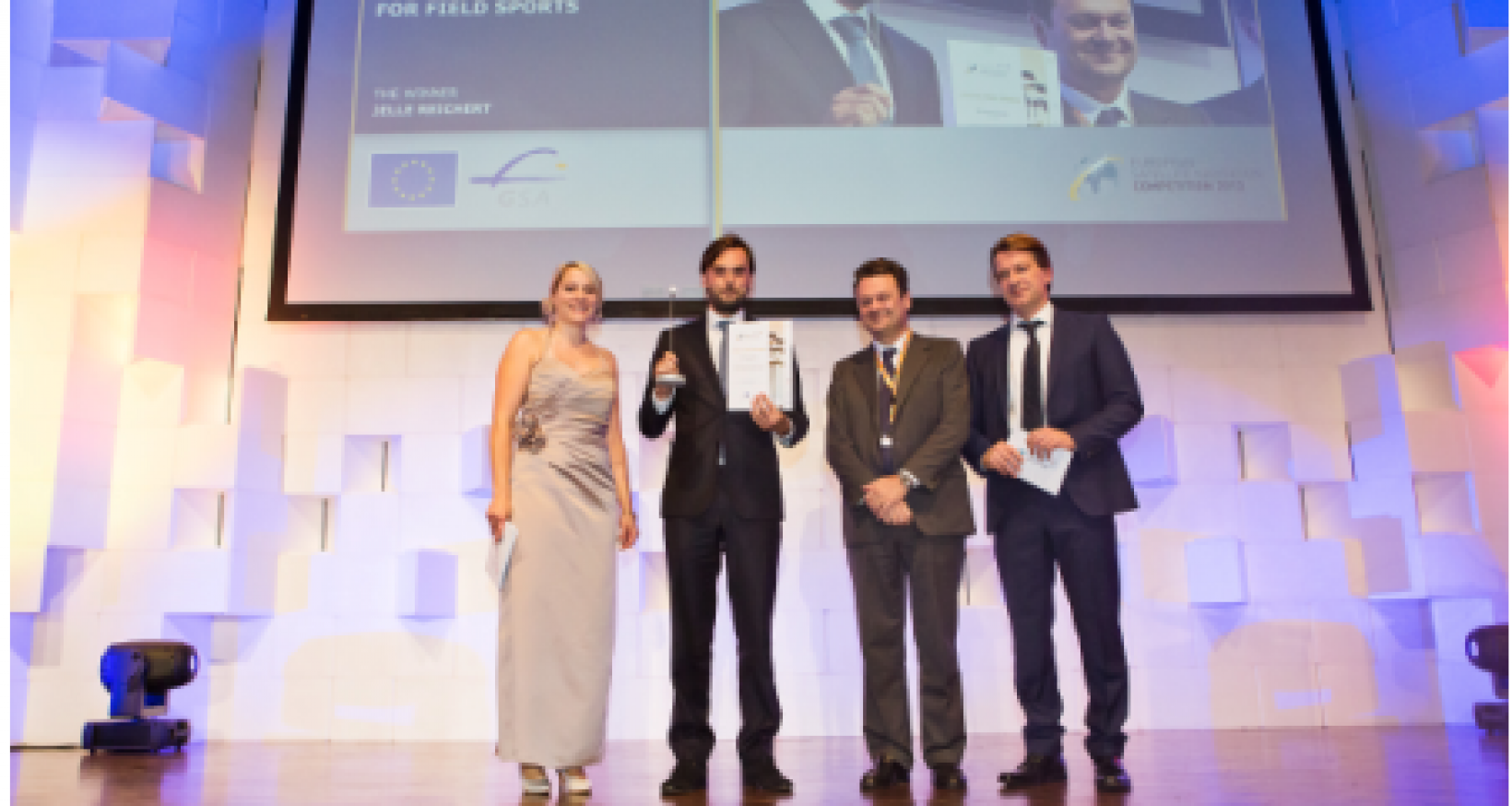 A concept to monitor field sports in real-time has won this year’s GSA Special Topic Prize in the European Satellite Navigation Competition (ESNC). Project JOHAN will enable assessment of players’ performances and the development of new tactics based on players’ capabilities. The idea employs tiny wearable GNSS receivers and uses EGNOS to ensure accuracy and reliability. The project received the prize at the Galileo Masters / ESNC 2013 awards ceremony that took place in Munich on 5 November.

This year’s winner of the GSA Special Topic Prize is the brainchild of recent Dutch graduate Jelle Reichert. Eighteen months ago sports enthusiast Jelle graduated from Delft University of Technology with an engineering degree in aerodynamics and currently works for a consultancy firm in the aviation sector.

Jelle read about the ESNC in a newspaper and he immediately started to think about what kind of applications there could be for accurate positioning in sports. He is a runner and a cyclist and regularly uses GPS devices to monitor his performance. But what about using the technology for field sports such as soccer, rugby or field hockey?

The resulting concept is called JOHAN: The Digital Oracle for Field Sports. The idea was named in honour of the famous Dutch footballer, TV sports pundit and oracle of sporting wisdom Johan Cruyff.

“Johan Cruyff is renowned for his opinions and controversial views in Dutch sport,” says Jelle. “My concept is a digital training aid that can also act as an oracle for sports coaches – but based on real data monitoring of every move that a team of players makes.”

Jelle collected his prize at the glittering European Satellite Navigation Competition 2013 Awards Ceremony held in the art deco splendour of the Alte Kongresshalle in Munich, Germany on the evening of 5 November.

His winning idea is to develop a system to track field sports players in real-time using the EGNOS system and, in the future, Galileo.

Current sports tracking technologies, for example video-based systems, are expensive. “These systems are only available for rich sports clubs such as Ajax in the Netherlands,” says Jelle. “And they are not flexible in that they are usually dedicated to one sports field or training ground. They are not easily transportable.” And current GPS systems are just not accurate enough. However, using EGNOS and Galileo, greater precision (less than one 1 meter) and reliability can be achieved. 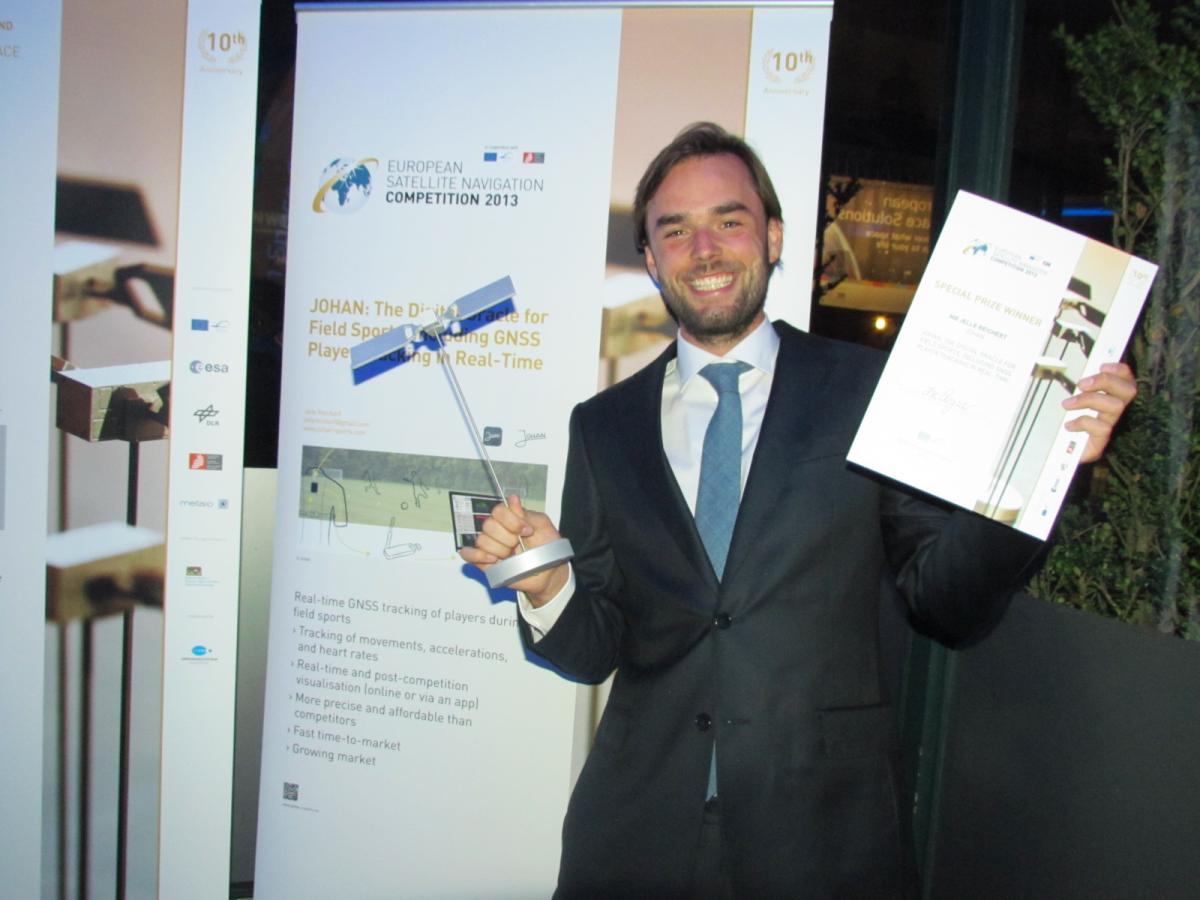 “My system must be affordable, portable, small, and robust,” says Jelle. In the JOHAN concept, every player wears a tiny GNSS device than tracks their position,  movements, accelerations and heart rate. The data is then transferred, stored and analysed to give useful information, such as distance run, speed, collisions and maximum heart rate. The data can be viewed in real-time online or post-match, for example, on a mobile app.

“This kind of information is highly valued by sports teams and academic institutes,” says Jelle. “It can be used to analyse each player’s physical performance and even pick up early signs of injury.”

But Jelle sees a second use for the data that could be even more useful. “Using the data the coach gets to know exactly what the capabilities of his players are. This can support the development of tactics that are actually based on real data rather than a trainer’s intuition,” he explains. “That is why I call it a ‘Digital Oracle’.”

This is the sixth year in a row the European GNSS Agency (GSA) has offered a special topic prize for the most innovative application using the European Geostationary Overlay Service (EGNOS). EGNOS, which has been operating an open and free service in Europe since October 2009, augments current global satellite navigation systems, radically improving accuracy and precision of positioning, and enabling current GPS to be used for safety-critical applications such as aviation.

The winner of the GSA prize receives six months of support at the European Business Innovation incubator of their choice with the possibility of extending the assistance to a year. The prize has a maximum value of around € 40 000.

Jelle will be spending his time at the innovation incubator established at ESA Noordwijk. Here he plans to work up a robust technical proof of concept to ensure he can deliver the accuracy that sports trainers and coaches require.

“Once I have a technically sound system, then I will analyse the market and get a good understanding of what exactly the initial product offering should be,” concludes Jelle. “It’s a great opportunity!”