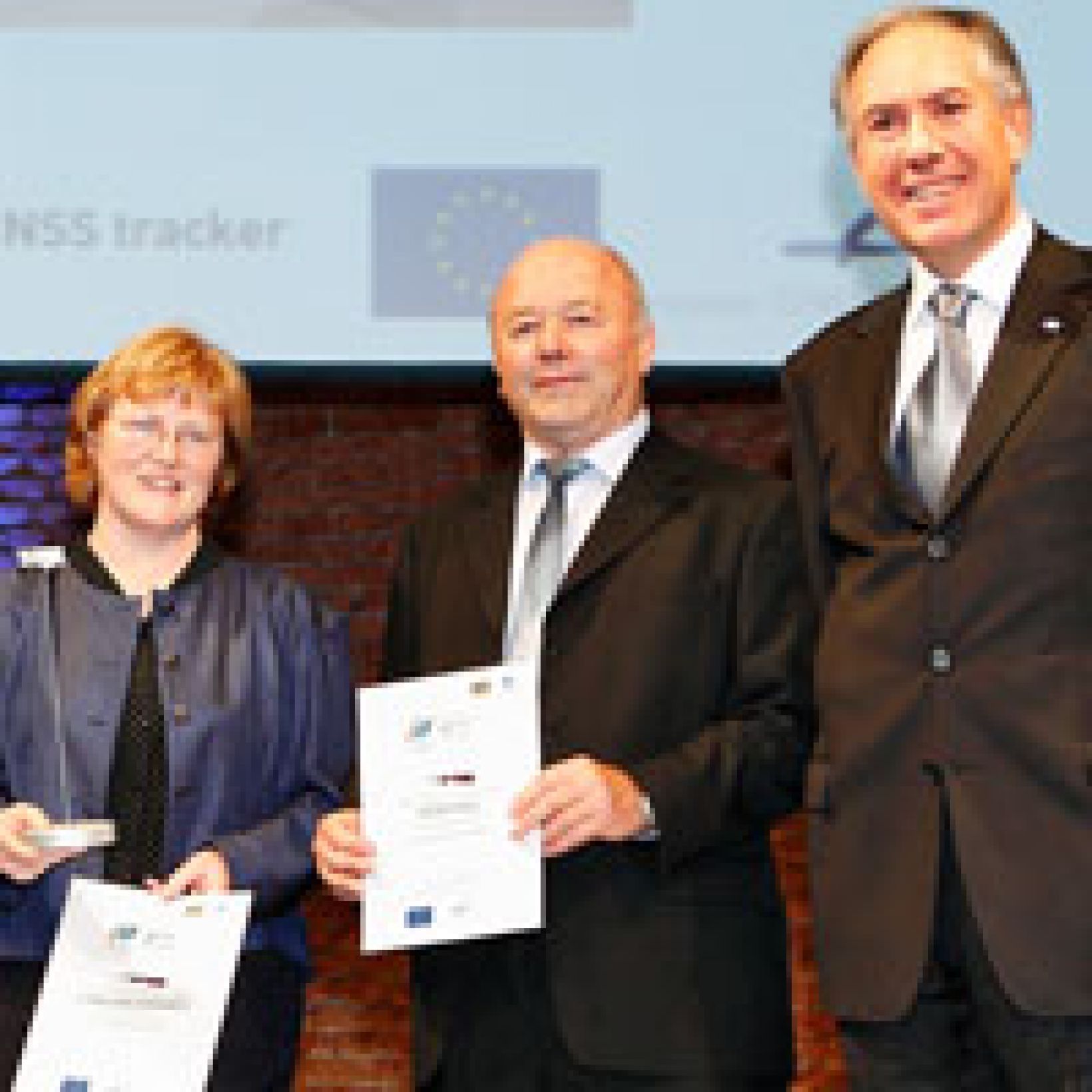 The 2008 winners of the GSA’s Special Topic Prize at the European Satellite Navigation Competition are using their award to complete a working prototype of a new location system for rescuing people who are lost overboard at sea.

The Sci-Tech team began using their GSA award – accommodation at an incubation centre of their choice for up to 12 months – on 1 June 2009. Sci-Tech’s five-member team will use the time in the incubator to finish the prototype and attract seed investors, says Hall. The company works from Hertfordshire’s Business and Technology Centre in Stevenage, where it has an office and a laboratory. During the first part of the year the team reviewed the market for their POB system. They also created a design using a highly sensitive, EGNOS-enabled GNSS chip, a state-of-the-art radio transceiver with a power output stage, and a processor capable of handling the system’s software requirements.

The company is in the process of developing a prototype that will include 90% of the electronics of the final product. The prototype will give the company the ability to vary a number of factors and resolve some outstanding technical details, says Hall.

The re-design is expected to take until the end of July when Hall says the team hopes to put the electronics and software through trials in the laboratory and at sea. Once this stage is completed, they will tweak the electronics board that runs the system.

“At the end of the incubation period we hope we will be in the final design stage and heading toward a pre-manufacturing process,” he says.

Sci-Tech now needs an estimated €58,000 in seed money to complete the trials and start the next stage of development with a good working model, he says. Due to the economic crisis and the drying up of investment funds Sci-Tech is in the position many start-ups are currently facing.

“Our development of the technology is progressing well but we are struggling to find the needed financing,” says Hall. “It is rapidly becoming a problem.”

Still, Hall and the team remain very optimistic that the company will get help, given the product’s superiority over existing POB rescue systems. The incubation period has given the small team the support and breathing space they need to carry out the development work and seek investment.

“We are in a very good position,” he says. “The product is unique.”

The Sci-Tech’s POB system might never have been developed had it not been for the personal interest of some of its team members in sailing. They saw the necessity for a system with more accuracy than is currently available on the market and wanted to take advantage of the improved accuracy and signal verification that EGNOS brings to GNSS.

Existing systems on the market work by triggering a remote rescue by search-and-rescue services, or by providing a bearing on where the person fell overboard – often long after the person may have drifted from that location.

Sci-Tech’s POB rescue system consists of a personal device that attaches to a crew member’s clothing or safety jacket, along with a signal detection unit linked into a vessel’s satellite navigation system. It tracks a person’s location using GPS and EGNOS and transmits their position back to their ship in real time.

EGNOS is crucial to finding a person lost overboard quickly. Knowing exactly where a person is in real time is essential to finding them quickly, before they drown in rough seas or die from hypothermia.

“The best chance of rescue is by the boat you have fallen from,” Hall notes. “No current solution currently on the market can guide rescuers directly back to the actual POB position.”

By itself, GPS, the US satellite navigation system, is neither accurate nor reliable enough to be accepted as a sole means of navigation for safety critical applications, such as landing an aircraft or navigating a ship.

Hall sees the Sci-Tech’s POB device being developed later on to take advantage of Galileo, Europe's independent global navigation satellite system that is set to become a part of the GNSS network, along with GPS, and Russia’s GLONASS. EGNOS is Europe’s ‘pre- Galileo' satellite navigation system.

The GSA presented the Sci-Tech team with their award at the European Satellite Navigation Competition ceremony held on 21 October 2008 in Munich, Germany.
The creation of the Special Topic Prize is part of the GSA’s programme to stimulate new applications for EGNOS. The GSA currently works with the European Commission on a range of market development activities aimed at helping European entrepreneurs and businesses – especially high tech small- to medium-sized enterprises (SMEs), business incubators and related networks – commercially exploit EGNOS and Galileo.

The European Satellite Navigation Competition is an international competition that awards the best ideas for innovative applications in satellite navigation. It has been held annually since 2004 under the patronage of the Bavarian State Ministry for Economic Affairs, Infrastructure, Transport, and Technology.

The deadline for applications for this year’s Galileo Masters competition is on 31 July 2009.

Media note: This feature can be republished without charge provided the GNSS Supervisory Authority (GSA) is acknowledged as the source at the top or the bottom of the story. You must request permission before you use any of the photographs on the site. If you do republish, we would be grateful if you could link back to the GSA Web site (http://www.gsa.europa.eu).