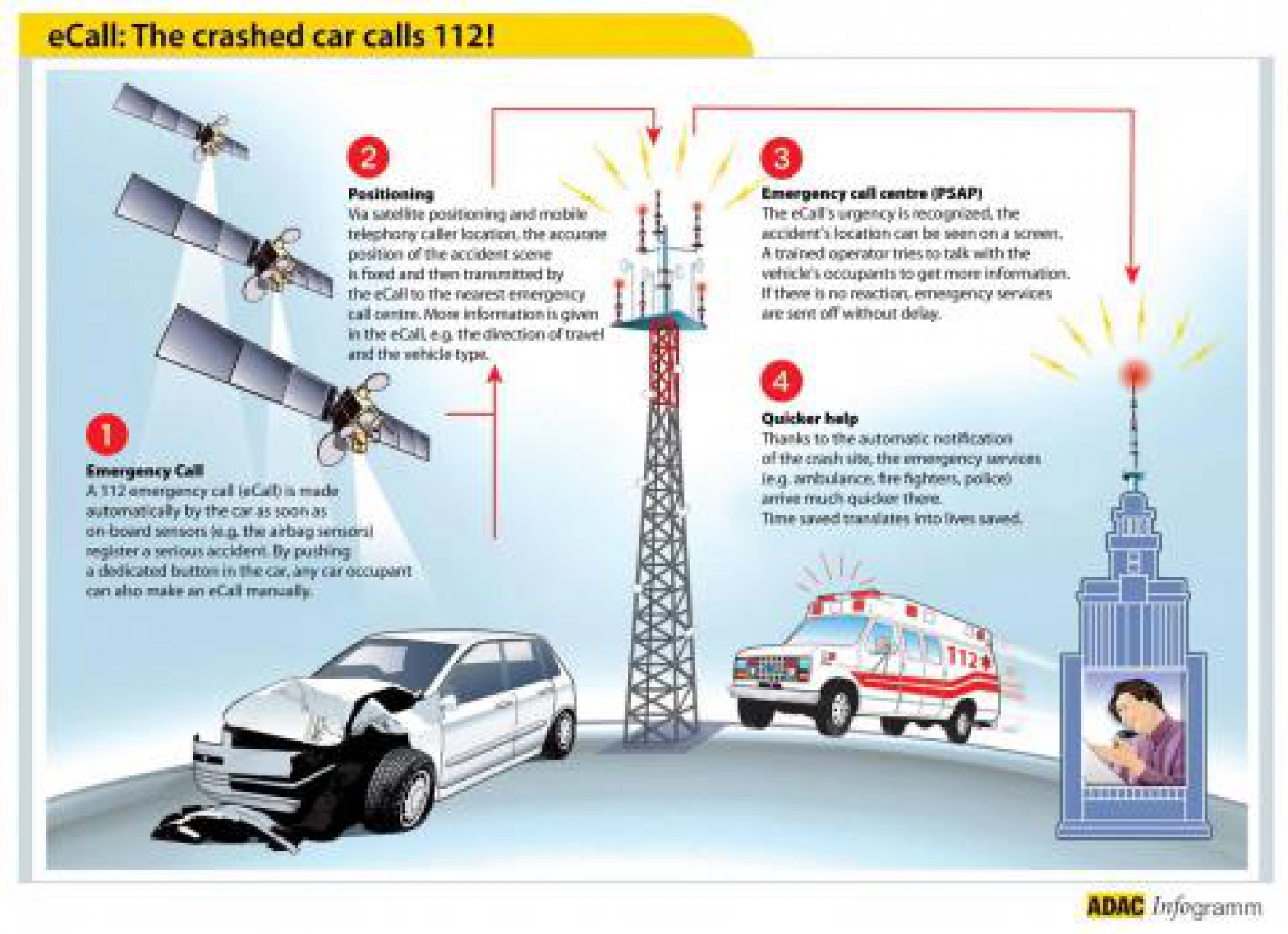 At a recent live demonstration in Prague, the public was given a unique preview of Europe’s eCall system in action. Powered by European GNSS technology, emergency services will be able to respond to accidents more quickly and accurately. As a result, lives will be saved.

According to organizers of the live demonstration, part of the European Space Solutions Conference 2014 in Prague, the concept of Europe’s eCall emergency service is simple. Each car is equipped with a black box, similar to what is found in airliners. When there is an accident, the black box is automatically activated, transmitting information to the public safety answering site, which instantly creates an event that records such data as the location of the vehicle, number of passengers, and type of vehicle.

“This information is then used to coordinate a faster launch of rescue services who can quickly reach you,” says Viktor Szabo of UAMK, a Czech company developing the system. “All-in-all, it takes only 16 seconds from the time of the crash to the operator receiving the information and dispatching emergency services to the scene.”

One question raised is why this automation is needed – with mobile phones, can’t the passenger just call emergency services? To answer this, Viktor invited guests to take a ride in the crash demonstration vehicle.

Once inside the demo vehicle and buckled up, the car flips over and the airbag is deployed. The passenger soon finds themselves trapped between the seat and the airbag, unable to use their arms and thus unable to reach their mobile phone. Thus, the brilliance of the automated call system.

Your Car Can Call for Help

In accordance with EU objectives, all new cars will soon be equipped with this emergency call system. Once installed, whenever there is an accident the unit will automatically dial the 112 emergency number, sending a minimum set of data relevant to the accident information. Europe’s satellites provide the precise location of the vehicle.

This information is then sent to an operator of the 112 emergency number who – thanks to satellite information – can see the location of the accident on a map. The operator can communicate directly with the passengers.

Read More: How to Enable Better Location for Emergency Calls: Galileo and 112

At the same time, the data transmitted by the eCall system is sent to emergency services, who are immediately dispatched to the scene. As these responders head to the accident site, they are guided by satellite-generated traffic information, ensuring efficient routing. 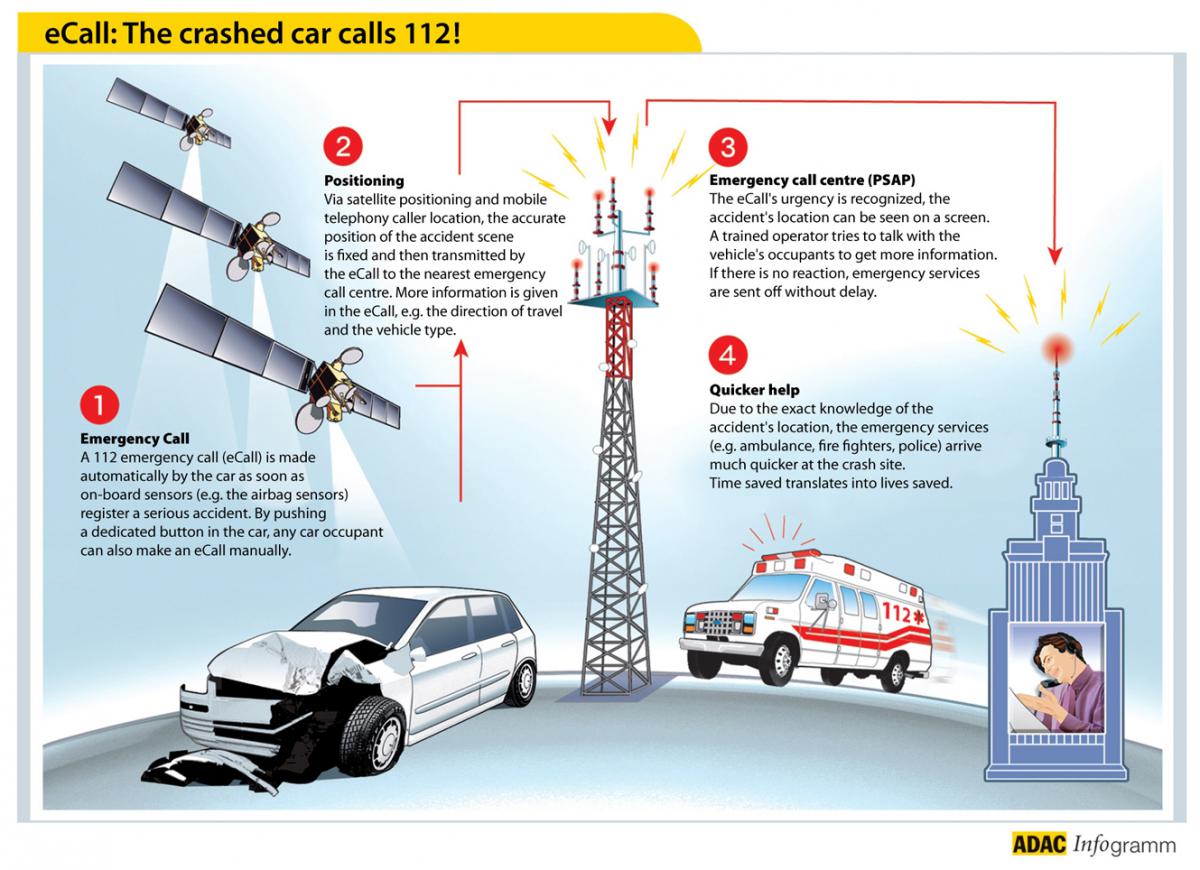 In order to operate the eCall system at the international level, it must be deployed as technically compatible. The goal of the European HeERO project is to define and verify interoperability of the eCall service. A three year project launched in 2011 and the Czech Republic participates through the Ministry of Transport and the Ministry of Interior – General Directorate of the Fire Brigade of the Czech Republic.

The HeERO project is partially funded by the ICT Policy Support Programme (ICT PSP) as part of the Competitiveness and Innovation Framework Programme of the European Union.

eCall at a Glance

•    Even though you will not be able to call for help, the rescue staff will be automatically informed about the accident and will hear your call for help
•    eCall will precisely and immediately identify the location of the accident and will automatically transmit verified information to the Public Safety Answering Point (PSAP)
•    In the EU, the eCall system is being developed according to European standards and common technical principles
•    Time plays an important role – reduction of the response time by intervention units may mitigate serious health consequences of injured persons that could be caused by late medical help
•    The information about the accident is forwarded from the PSAP to the Traffic Information and Management Centre, meaning drivers approaching the accident scene will be informed about the extraordinary traffic situation and provided alternative routes