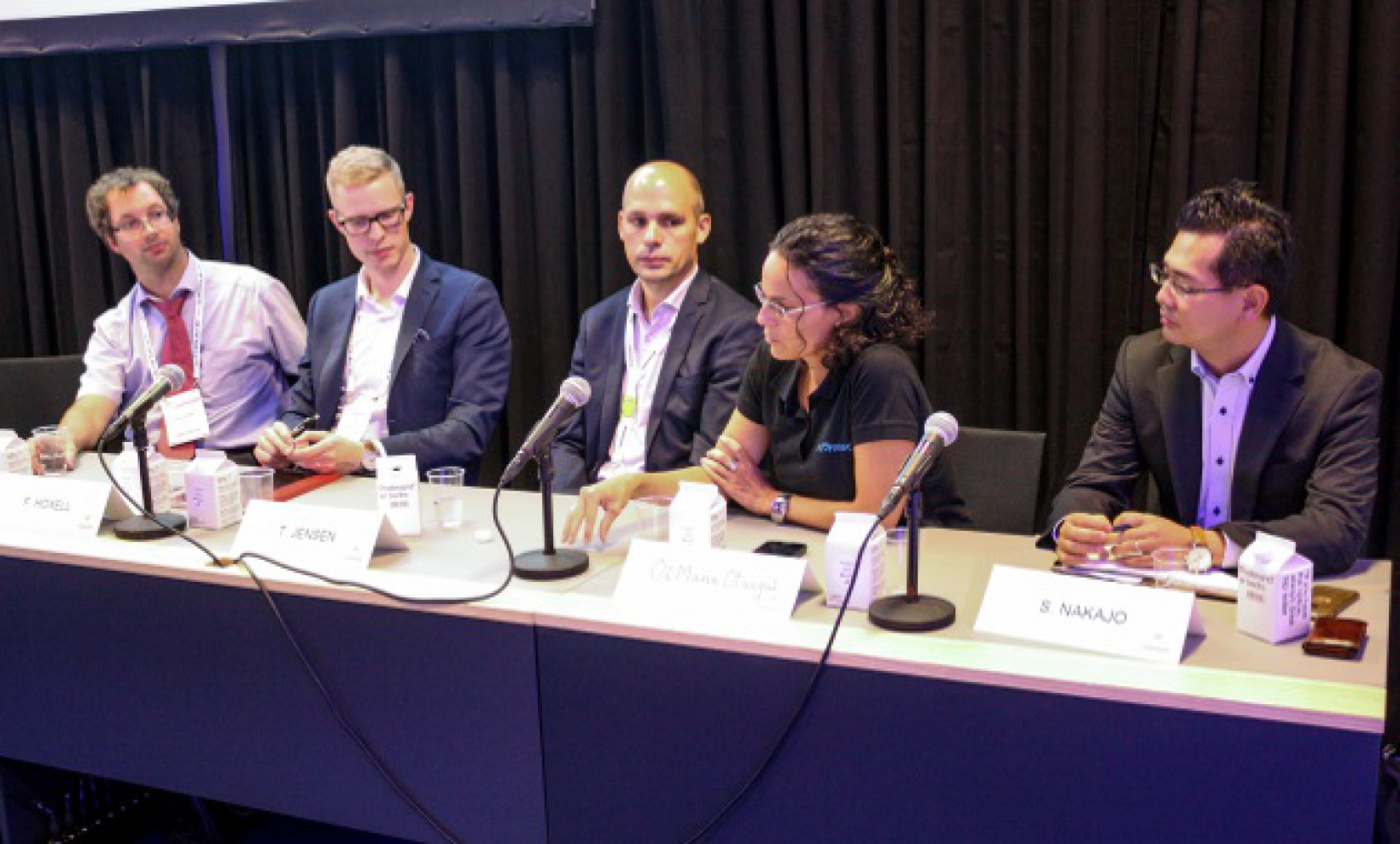 Key representatives from the automotive industry came together at the ITS World event in Copenhagen to discuss their work in the field of autonomous driving. All of them are using Global Navigation Satellite Systems (GNSS) solutions and other localisation techniques in order to make safe driverless road transport a reality.

GNSS technologies, including Europe's Galileo satellite positioning system, are playing a central role in all of the principal autonomous vehicle prototypes currently under development. Typically, satellite positioning is being used in a complimentary fashion with other integrated sensor- and connectivity-based systems.

The session on precise positioning for autonomous driving at this year's ITS World in Copenhagen was co-moderated by Fiammetta Diani, GSA Deputy Head of Market Development. She said, "There is an increasing need for access to secure GNSS for autonomous driving. The initiatives we will hear from today are all working to meet this challenge."

The system is capable of combining multi-GNSS (GPS + GLONASS + Galileo), inertial sensors, vehicle data, visual odometry and feature mapping, as well as LiDAR and radar. Tight coupling of GNSS and all of these other systems ensure reliable positioning even in areas with limited satellite visibility.

"Our platform can be used for the whole range of transport applications," Henkel said, "from road transport to maritime and drone navigation, as well as in robotics, surveying applications and of course in agriculture for precision farming."

The system is particularly well suited to autonomous driving applications, because of its high accuracy, high availability and continuity, and, with Galileo, its integrity. All of this comes at an affordable cost, said Henkel. "The ANavS module is available in different versions, with one, two or three integrated GNSS receivers, depending on the specific level of performance required."

Fredrik Hoxell is Senior ITS engineer at truck manufacturer Scania Group in Sweden. He described work under the EU H2020-funded PRoPART project. "We set out with the understanding that pre-connected, manual, partially automated and fully automated, connected vehicles will all co-exist on European roads at least during an extended transition period."

The project, Hoxell explained, has developed and demonstrated a high-availability positioning solution for connected automated driving applications. The system implements sensor fusion using information from both the on-board vehicle sensors and an off-board road infrastructure traffic sensor. It is the off-board sensor technology that allows the system to account for non-automated and non-connected road vehicles.

The project's RTK software solution exploits the distinguishing features of Galileo. "We are benefiting from the high multipath mitigation enabled by the Galileo binary offset code, and there is a substantial improvement of reliability of the carrier phase ambiguity resolution. All of this makes Galileo a really good addition to our sensor platform," he said.

Tom Jensen of GNSS giant TomTom discussed his company's long experience in digital mapping, now a critical resource for autonomous driving applications – and he impressed session participants with some very big numbers: "We have been compiling data from our GNSS receiver users for 10 years. We have 500 million devices currently running and today we have about 90 trillion data points!"

The European company is putting an enormous amount of energy and resources into the development of methods for fusing that data for the generation of detailed maps that can be updated within minutes. "And now we want to open that up for the users," he said.

"We are meeting with public authorities, governments, decision makers who we know can use this information, for the roads, for the infrastructure, to plan their projects in the best and most intelligent way." TomTom data is of unparalleled value, Jensen argued, for mapping, for understanding traffic flow and traffic changes in near real time.

The H2020-funded TransSec project coordinated by Daimler AG Trucks  is aimed at delivering a solution to the recent rise in vehicle-based terror attacks across Europe. In a number of such incidents, perpetrators used heavy trucks to attack pedestrians.

Oihana Otaegui is Head of ITS at TransSec project partner Vicomtech. She said, "We are developing and evaluating autonomous systems to detect and prevent trucks from being misused, to prevent these incidents from occurring. The trustability provided by Galileo is very remarkable. We have achieved advances in GNSS positioning, map data and map matching. On-board environment sensors and V2X communication are all combined in a local dynamic map. This can then be used for movement monitoring, critical area alarm, pre-crash object detection and for the implementation of non-defeatable emergency manoeuvres."

The project team is also concerned with developing new and more effective methods to combat GNSS jamming and spoofing, which represent further threats to security in the context of automated driving technologies. Here, Galileo's unique authentication feature will play an important role.

Japan's SIP (Strategic Innovation Promotion Program)-adus (Automated Driving for Universal Services) project is undertaking a wide range of activities aimed at ushering in the next generation of road transport systems.

Project researchers are taking on, among other things, the human-machine interface in for autonomous and semi-autonomous driving. Another area of interest is in the application of automated driving technologies in buses. The team are investigating ways to implement precise stopping at bus stops with almost no space between the bus and the curb. This will make getting on and off easier for wheelchair users and elderly passengers.

Satoru Nakajo of the University of Tokyo discussed ongoing field operational tests involving the use of digital maps for automated driving. "The project is validating the specifications and accuracy of a high-accuracy 3D mapping function," he said, "including data updating and distribution systems, and of the critical linkage of dynamic data delivered via road infrastructure."

The full-on pursuit of autonomous driving represents a real paradigm shift in the automotive industry. The initiatives on display at the ITS World conference in Copenhagen underline how high-level research and development is leveraging powerful GNSS signals, advanced sensing techniques and other innovations.

Particularly when used in conjunction with other complimentary technologies, Galileo represents a vital building block for automated driving systems.