The complete Galileo constellation will comprise satellites spread evenly around three orbital planes inclined at an angle of 56 degrees to the equator. Each satellite will take about 14 hours to orbit the Earth. One satellite in each plane will be a spare, on stand-by should any operational satellite fail.

From most locations, six to eight satellites will always be visible, allowing positions and timing to be determined very accurately to within a few centimetres. Interoperability with the US system of GPS satellites will only increase the reliability of Galileo services. 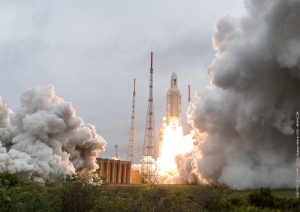 Once the In-Orbit Validation (IOV) phase was completed, the remaining satellites are being placed in orbit at regular intervals to reach Full Operational Capability (FOC).

The first pair of Galileo’s FOC phase, GSAT0201 and GSAT0202, was launched in August 2014. Despite having been injected into an incorrect orbit, these were moved to an improved orbit at the end of 2014 and the beginning of 2015.

The Galileo FOC satellites provide the same capabilities as the previous IOV satellites, but with improved performance, such as higher transmit power.

With 26 Galileo satellites in Orbit (4 IOV plus 22 FOC satellites), the constellation is on track to reach completion in 2023.

The GIOVEs were aimed at testing Galileo positioning system technologies in orbit.

GIOVE-A, was launched in December 2005, its primary goal being to claim the frequencies allocated to Galileo by the International Telecommunications Union (ITU). It has also been used to test the design of two on-board rubidium atomic clocks.

GIOVE-A was the first European satellite to be launched into medium Earth orbit (MEO). It carries two environmental monitors that have been in operation almost continuously since launch, gathering vital data about the Galileo intermediate circular orbit environment and helping in the design of the full constellation.

GIOVE-A was designed and sized for a 27 month mission. Although still operational (by prime contractor Surrey Satellite Technology Ltd of Guildford, UK, to gather radiation data and performance results from a GPS receiver), it was officially retired on 30th June 2012, having been successfully operating for much more than double its design life.

After launch in April 2008, early orbit operations and platform commissioning, GIOVE-B's navigation payload was switched on and signal transmission commenced.

Key facilities in the testing of GIOVE-B signals include the GIOVE-B Control Centre at Telespazio's facilities in Fucino, Italy, the Galileo Processing Centre at ESA's European Space Research and Technology Centre (ESTEC) in the Netherlands, the ESA ground station at Redu, Belgium, and the Rutherford Appleton Laboratory (RAL) Chilbolton Observatory in the United Kingdom.

GIOVE-B was retired from service on 23rd July 2012 after more than 4 years of service, and began raising its orbit to an “graveyard” orbit, where there is no danger of it interfering with the other operational satellites