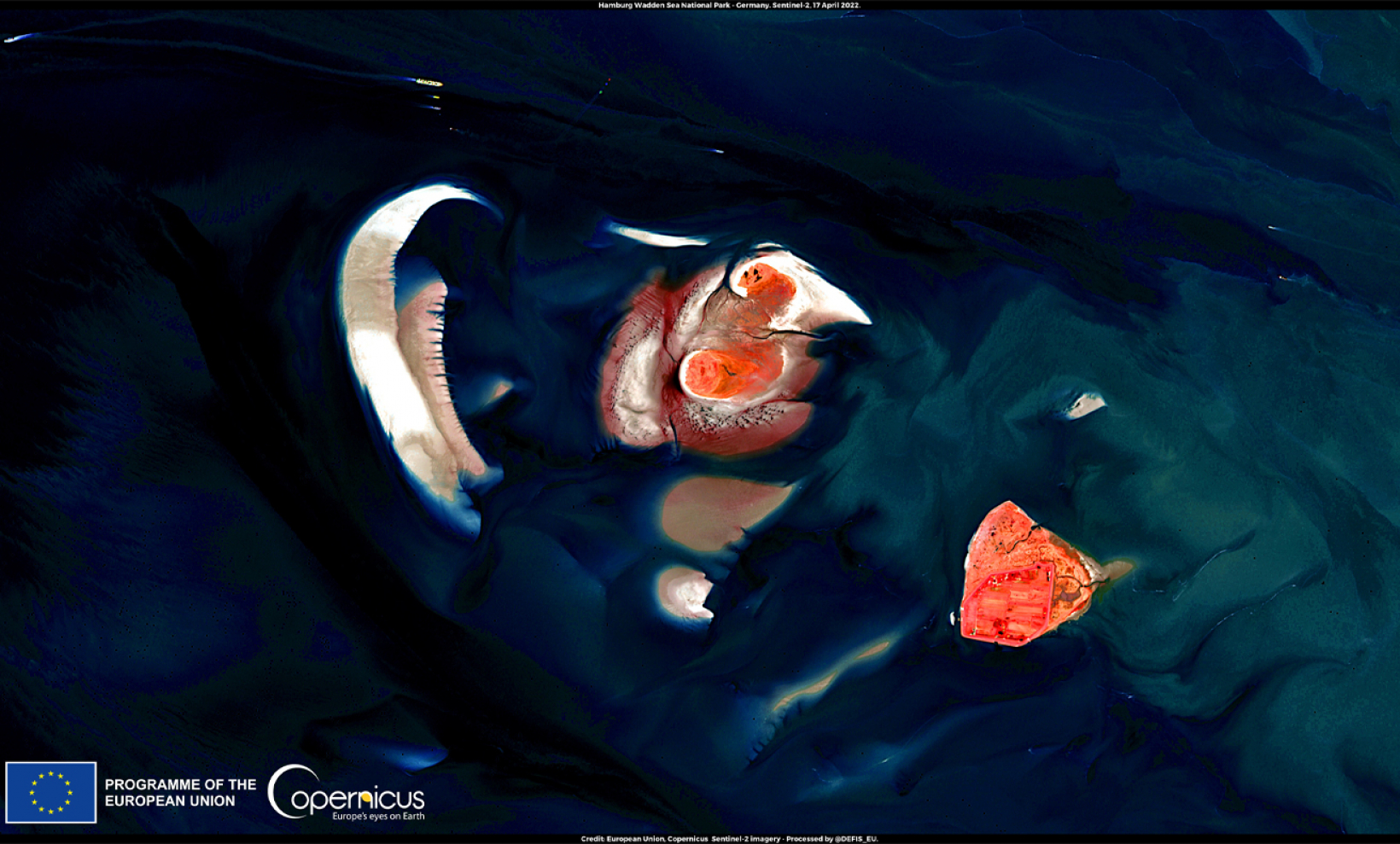 This image, acquired by one of the Copernicus Sentinel-2 satellites on 17 April 2022, shows the Hamburg Wadden Sea National Park, particularly the islands of Neuwerk, Scharhörn and Nigehörn within its perimeter.

While biodiversity loss is happening across all ecosystems, it is particularly pronounced in coastal regions. Not only are these areas some of the most biodiverse on Earth, they also host large human populations (40% of the population globally lives within 100km from the coastline) and substantial economic activity. But, as the human factor increases, these unique ecosystems are experiencing rapid habitat loss, overexploitation of natural resources, pollution and climate change – all of which contribute to biodiversity loss.

According to a recent online workshop entitled ‘Copernicus Biodiversity in Coastal Ecosystems’, the answer to maintaining a healthy balance between environmental protection and economic activity could be found in space.

“Long used to monitor land and marine ecosystems, Earth Observation is well-positioned to be a key tool in the fight against the biodiversity loss happening in Europe’s coastal regions,” said Directorate-General for Defence Industry and Space (DG DEFIS), European Commission representative.

The workshop, under the Copernicus programme umbrella, was jointly organised by DG DEFIS and EUSPA.

During the workshop, various organisations and end users shared how they use Copernicus services and data to address biodiversity loss in coastal areas. For example, in Finland, researchers are using Earth Observation to monitor coastal algae blooms and the impact these blooms have on the Finnish economy, while in the Galapagos Islands it is being used to track whale shark migration.

Another company is using satellite-based monitoring tools to help predict jellyfish swarms. “Jellyfish can have a huge impact on the Blue Economy, causing fisheries to collapse and clogging hydropower plants,” said Federica Colombo, a marine scientist at ColomboSky, a company that specialises in innovative satellite-based solutions for improving water quality monitoring and ensuring a sustainable use of marine resources.

Mitigating the effects of climate change

Marine scientists and policymakers also use Earth Observation to fight the effects of climate change – one of the major drivers of biodiversity loss. Take for example extreme weather events, a consequence of climate change that can have a big impact on coastal biodiversity. The European Marine Board shared how it uses Copernicus data to help researchers understand how these events impact coastal habitats and marine species. This same data is also used by policymakers to forecast extreme weather events and increase resilience in coastal areas accordingly.

Another consequence of climate change is the warming of the world’s oceans, a warming that can cause coral bleaching. Researchers from the Council for Scientific and Industrial Research (CSIR) in South Africa, use Copernicus data to monitor sea surface temperatures in the western Indian Ocean. “Having accurate data allows us to better predict bleaching events and how such events could impact food security and ecosystem stability,” said CSIR Senior Researcher Marie Smith.

While all this work is beneficial, the problem is that it tends to happen in silos. “The vast majority of biodiversity monitoring programmes take place at the national or even subnational level,” said Joana Soares, Executive Secretary at the Marine Biodiversity and Observation Network.

To have a true impact, these individual projects need to be connected – and that requires harmonised policy. “Harmonisation starts with Earth Observation, as access to accurate data can help tie the many different projects, goals, and policies targeting biodiversity loss together,” said DG MARE representative.