Power-efficient positioning for the IoT 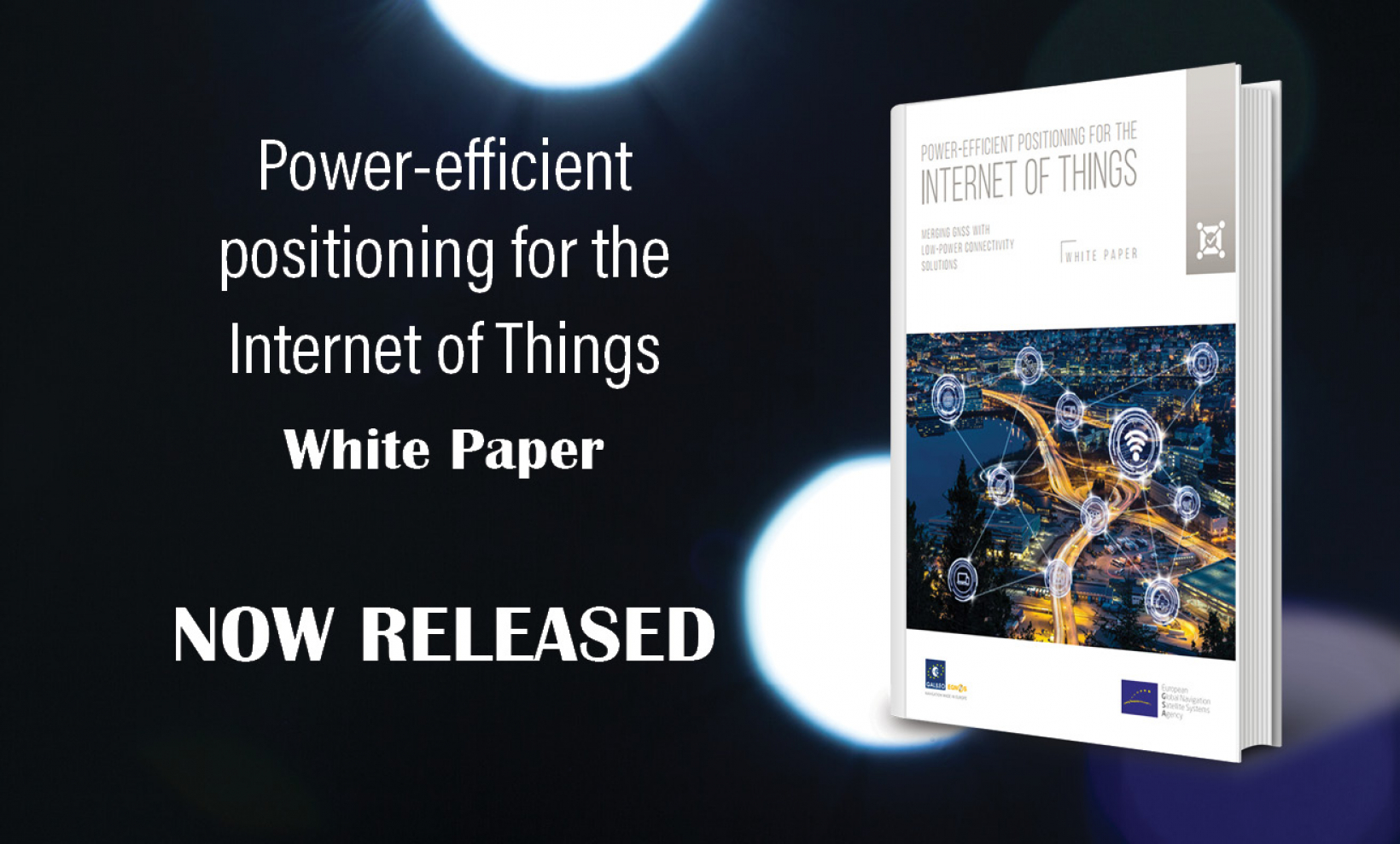 The GSA White Paper looks at how positioning for the IoT can be made more power-efficient.

The European GNSS Agency (GSA) has published a White Paper on “Power-efficient positioning for the Internet of Things”, providing an overview of GNSS technologies that are relevant for low-power IoT applications, including those that require hybridisation with other connectivity solutions. The GSA is organising a dedicated webinar on 18 June to present the main findings from the paper.

The world is embracing Internet of Things (IoT) applications. Billions of internet-connected devices are capable of sensing, communicating, interacting, computing and actuating. These devices are set to become even more integrated into our daily lives and by 2022 it is estimated that around 18 billion out of 29 billion connected devices will be related to the IoT.

With millions of moving interconnected devices in the IoT environment, many applications require or benefit from knowing the location of an individual device. In this context, the latest GSA White Paper looks at how GNSS-based positioning for the IoT can be made more power-efficient, to meet the needs of this growing market.

GNSS is a viable solution for tracking objects in the IoT world. However, the power consumed by positioning is an important concern. Two basic approaches have emerged in recent years to optimise consumption: transmission of pseudoranges for remote position determination, and snapshot techniques. In the first of these, the power consumption related to determining position is saved by transmitting the measurements to an external facility with no power restrictions while, for the second, the GNSS receiver is only activated for short periods to determine the position.

Read this: Harnessing Galileo to shape the future of IoT

Combining both approaches will decrease the power consumption even further but, ultimately, the optimal solution will depend on the application in question. “When deciding on a GNSS-based solution for a given application, numerous factors play a role including target accuracy, selected LPWAN, desired battery life, ease of integration, and hardware and implementation cost,” according to the report.

The White Paper also advises applications that require a position accuracy of one meter or less to use a multi-constellation, multi-frequency receiver. “However, as most low-power IoT applications prioritise extending battery life, a multi-constellation single-frequency receiver is sufficient when positioning accuracy of multiple meters is acceptable,” it notes.

The report also states that, when deciding on an energy-efficient GNSS technique, the choice of the terrestrial network limits the possible options, as most solutions rely on external data to determine the position via GNSS.

The main findings from the White Paper will be presented at a dedicated webinar on Power-efficient positioning for the Internet of Things, to take place at 14:45 CET on 18 June. This GSA-hosted webinar will also feature input from major chipset manufacturers in the IoT domain such as STM & U-blox.

What’s more, EU-funded R&D projects that are working to reduce the power consumption of GNSS positioning for the Internet of Things will also present their innovative solutions. These include: “Accurate GNSS POsitioning for Low power and Low-cost Objects” (APOLLO), which aims at providing a Galileo-based geolocation solution for the IoT market by drastically reducing energy consumption.

The APOLLO project noted in the White Paper that: “The ability to calculate the GNSS position of IoT objects with a very small energy footprint will pave the way for a market of tens of millions of moving objects each year.”

Also presenting at the webinar will be the GEONAV IoT project, which is working to develop and deliver precise ubiquitous positioning and navigation applications and services; and the Galileo of Things gs(GoT) project, which is targeting the delivery of a Galileo semiconductor-IP core that mates with NB-IoT IP for low-power consumption solutions.