The world has a water problem, and space may have a solution

Both Copernicus, for EO, and Galileo, for GNSS, are also being used to support Europe’s growing aquaculture sector.

The world has a water problem. At present, according to the World Health Organisation (WHO) there are 785 million people who lack access to clean water – that’s one in every 10 people on the planet. But the problem goes well beyond the water we drink; it also affects the food we eat. For example, water scarcity, due in part to the increase in droughts caused by climate change, means farmers have less water to grow their crops with.

In parallel, people are increasingly looking to our oceans, lakes and rivers for food – a shift that causes another problem: overfishing. According to some estimates, nearly 30% of all commercially fished species are now considered to be overfished. In the Mediterranean and Black seas, that number is closer to 88%.

With climate change set to exacerbate the water crisis, there’s an urgent need for new solutions.

According to the latest edition of the EUSPA EO and GNSS Market Report, Earth Observation is already being used to assess the location of fish stocks and to track the location of vessels in an effort to prevent illegal, unreported and unregulated fishing – an important component of the EU’s Common Fisheries Policy (CFP).

Both Copernicus, for EO, and Galileo, for GNSS, are also being used to support Europe’s growing aquaculture sector. For instance, by providing information and data on environmental conditions and long-term weather forecasts, EO-based applications play a key role in selecting ideal locations to establish aquafarms. Once the aquafarm is up and running, Copernicus, together with Galileo, is used to optimise operations and provide aquafarmers with a wide range of insight and information.

Keeping an eye on our oceans’ health

While sustainable fisheries and aquaculture are important to securing food production, and are key components to the European Union’s Green Deal, they both depend on having healthy oceans. Here too, GNSS and especially EO play an important role.

Oceans, which account for about 71% of the Earth’s surface, are at the centre of climate change. That’s because oceans act as a natural carbon sink, essentially absorbing much of the carbon being emitted into the atmosphere. As the oceans absorb more carbon, their temperatures go up, which can lead to a whole host of problems, including rising sea levels, changes in fish migration, the killing of coral reefs and alterations to the world’s climate patterns.

To mitigate these issues, the Copernicus Marine and Climate Change Services monitor a number of key climate indicators, such as sea level, temperature, currents and salinity. This data can then be used to drive global climate policy decisions. 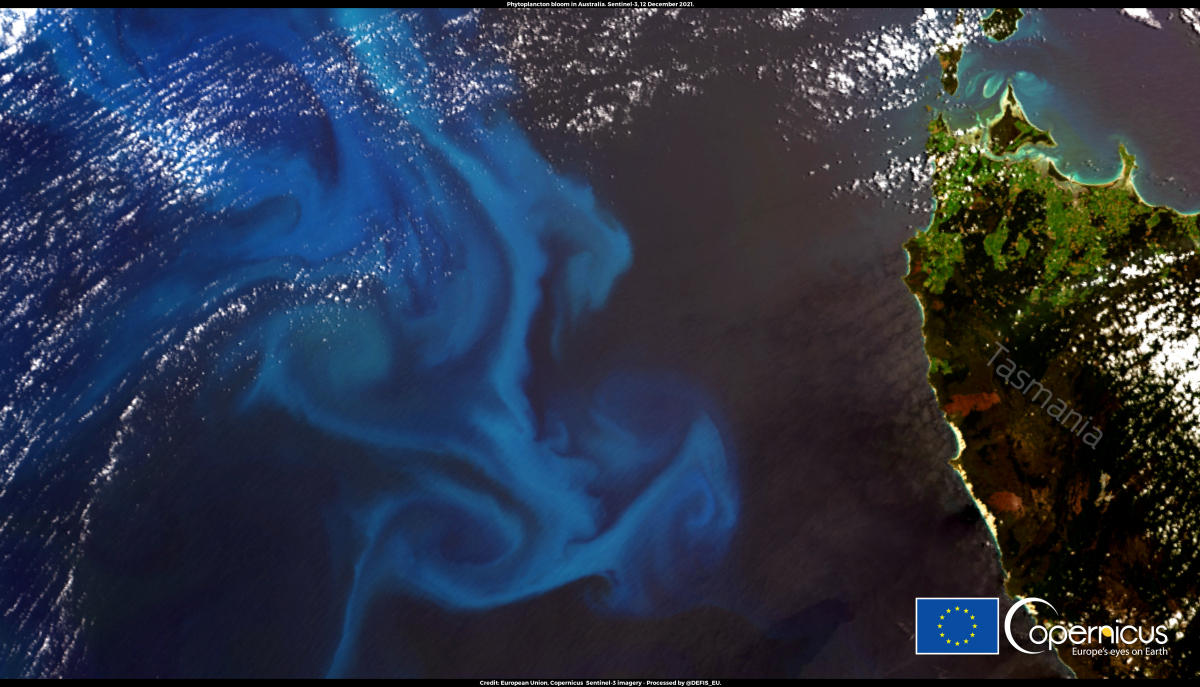 Phytoplankton are microscopic plants that grow in the sunlit surface waters of the ocean. When their concentration reaches a certain level, the bloom becomes visible from space.

EO’s usefulness doesn’t stop with salt water, it’s being used to monitor the quality of freshwater sources too. Today, scientists and policymakers regularly use data coming from Copernicus satellites to, for example, measure water surface temperature, which can tell us a lot about a lake or river’s overall health.

This same data can be used to track how rising global temperatures and more extreme weather events increase a body of water’s acidity, cause a build-up of pathogens, and change its nutrient concentration. And because quality freshwater is essential to drinking water, this same data can play a key role in achieving the United Nations Sustainable Development Goal of ensuring access to water and sanitation for all

So on this World Water Day, as you’re enjoying a fresh glass of H2O, be sure to look up and remember how space-based solutions are working to ensure the healthy climate, healthy oceans, and healthy freshwater systems that make our water sustainable, safe and sanitary.

Media note: This feature can be republished without charge provided the European Union Agency for the Space Programme (EUSPA) is acknowledged as the source at the top or the bottom of the story. You must request permission before you use any of the photographs on the site. If you republish, we would be grateful if you could link back to the EUSPA website (https://www.euspa.europa.eu).